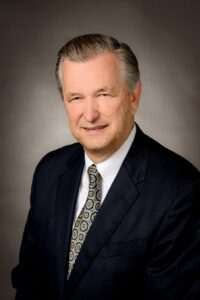 HUNTSVILLE, Ala., April 6, 2022 – The Port of Huntsville announced today that Rick Tucker, Chief Executive Officer of the international transportation and business hub which includes Huntsville International Airport, International Intermodal Center and Jetplex Industrial Park, will be retiring on December 31, 2022. Tucker’s leadership “has grown the organization to superlative reputation and provided powerful economic impact in the community,” said Mark McDaniel, Board Chairman of the Huntsville Madison County Airport Authority (HMCAA) d.b.a. the Port of Huntsville.

Additionally, Luther “Butch” Roberts, A.A.E., C.M.A., will assume the role of CEO for the Port of Huntsville starting July 1, 2022, McDaniel said. Roberts has served as COO/Deputy Director since 1996. McDaniel added that Tucker will continue to serve the organization as CEO Emeritus during the transition of leadership and in a part time capacity during his retirement, focusing on strategic regional, state and national opportunities to strengthen the Port’s position as a leader in the global transportation, logistics and international trade arena.

Major accomplishments at the Port of Huntsville under Tucker’s watch include the extension of the west runway to 12,600 feet, making it the second-longest in the southeast U.S.; the construction of a new 219-foot air traffic control tower expanding aviation development opportunities; construction of two parking decks with over 2600 spaces; construction of 10,000 feet parallel taxiway for B747 freighter operations; air cargo ramp expansion to accommodate 10 B747 parking positions; and a five-year terminal area capital improvement project completed in 2012 which included a new security screening checkpoint and public waiting area on the second floor and a new first floor baggage claim. Commercial air traffic has grown to more than 1 million passengers annually, and non-stop air service has expanded to 14 destinations.

Tucker has guided the completion of numerous expansions at the International Intermodal Center including over 200,000 square feet of air cargo facilities serving weekly international air cargo flights to Europe, Hong Kong, Shanghai, Cambodia and Brazil. Air cargo activities have positioned HSV as 18th of 182 airports in the continental U.S. for international air cargo freight volume. Tucker has guided the development and growth of the Jetplex Industrial Park, a 4,000-acre business park anchoring more than 75 international and domestic companies representing six million square feet of business facilities, a capital investment of $1.4 billion and 4,000 jobs.

Tucker is a respected leader in the aviation world having served as Chairman of the U.S. Policy Council for Airports Council International – North America (ACI-NA) and served more recently on the U.S. Department of Commerce Advisory Committee on Supply Chain Competitiveness. Leadership roles include President of the Aviation Council of Alabama Board of Directors and President of the North Alabama International Trade Association. He has served on the Alabama Commission on Infrastructure, the Airport Cooperative Research Program Oversight Committee and the Appalachian Regional Commission Network Appalachia. During his tenure Tucker has been recognized as one of Air Cargo World’s Most Influential Leaders (2006), as the recipient of Huntsville Rotary Club’s Vocational Excellence Award (2010), as NAITA’s International Trade Advocate (2013), was named the 2019 Airport Professional of the year by the Southeast Chapter of the American Association of Airport Executives (SEC-AAAE) and named the 2021 Airport Director of the Year, Small Airports Division by Airport Experience News.

“When I started at the airport 44 years ago I could not have imagined spending my entire career with just one employer. However, because we had a very small staff I was given some unique opportunities early in my career to expand and grow as an individual as the organization and community grew,” according to Tucker. “I give credit to the success of the Port of Huntsville to the talented staff and visionary board members surrounding me during my career, and especially the blessings of God! My understanding is that in 1967 when the new airport facility was built it was dedicated to the glory of God. I trust this approach will continue throughout our history,” Tucker said. “I have tremendous confidence in our team to achieve even greater success under the leadership of Butch Roberts. He is the right person at the right time!”

“Through Rick’s successes at the airport, Butch has been his right hand,” McDaniel said. “The Board has the utmost confidence in his ability to carry forward the mission of the Port of Huntsville. Butch’s steady and wise leadership has made him an ideal choice for the position of CEO.”

Roberts’ career in the aviation industry spans 36 years and began at Huntsville Madison County Airport Authority. He is a graduate of the University of Alabama in Huntsville (B.S. Accounting, 1985) and is a Certified Management Accountant and Accredited Airport Executive. He is a member of the American Association of Airport Executives, National Association of Accountants and the Alabama Space Authority.

“I look forward to continuing the work of implementing our Master Plan to grow the airport, intermodal center and industrial park to meet the needs of industry and commerce in our service area,” Roberts said. “We have already begun a new air cargo expansion and have applied for a license to land the DreamChaser commercial space vehicle here at HSV. With our upcoming terminal and concourse upgrades in the final planning stages, there is a lot to be excited about as we see air travel returning post-pandemic and our region’s economy prospering.”

About the Port of Huntsville

The Port of Huntsville is an inland port facility that is comprised of three operating entities – Huntsville International Airport, International Intermodal Center, and Jetplex Industrial Park. The Port of Huntsville is governed by an Airport Authority with a five-member Board of Directors. The Airport Authority also owns – but has management companies – for Signature Flight Support, Sheraton Four Points Hotel, and Sunset Landing Golf Course.

Huntsville International Airport (HSV) is known throughout its 18-county service region for providing customers with state-of-the-art facilities, amenities and services. Some notable features of HSV include its two parallel runways, one 10,000 feet and one 12,600 feet, with a 5,000-foot separation allowing for simultaneous operations during instrument conditions. With over 1 million annual passengers and six passenger airlines available to provide non-stop commercial service to 14 destinations, there is always a flight for everyone at competitive fares. For more information, visit flyhuntsville.com and portofhuntsville.com.