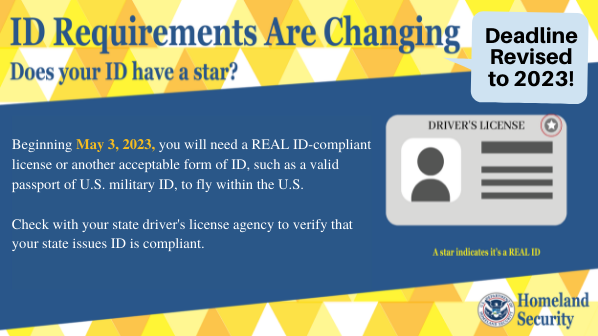 Alabama has expanded the number of locations to get your Star ID. STAR IDs are issued originally to qualified individuals only at Alabama Law Enforcement Agency Driver License exam offices. County-operated license offices will continue to provide renewals/duplicates for license, ID cards, and STAR ID.

At HSV we do our best to make your travel experience as easy as possible because Customer Service is important to us. Sometimes we don’t make the rules and we just have to follow them so even in instances we can’t control we try to find out all we can so that you can “know before you go”… Because of this we wanted to see just what the process for getting a Star ID in Alabama was before all of our passengers had to go through it themselves.

Here is our experience:

We did all of the research and we knew that we have until May 3, 2023 to get a STAR ID in Alabama because that’s the date that every traveler will be required to present a REAL-ID compliant license or another acceptable form of identification (passport) for domestic air travel. A REAL ID compliant license is one that meets, and is issued by a state that complies with, the REAL ID Act’s security standards.

So… This is pretty important: You can’t just get the STAR ID at any regular Driver’s License office. There are only a few specific locations that can provide the service state-wide and you will need an appointment for one of those locations. (Don’t worry because this actually saves you a lot of time and energy if you are doing this now and not procrastinating.) Yes, it’s out of the way to go to a different location, but in our experience we were able to schedule an appointment for the very next day and when we got to the office we were only waited for five minutes before being called back promptly at our appointment time. Even better news- it only took ten minutes for them to review and process the paperwork, take a new photo, take payment ($32.50) and issue the STAR ID. We spent less time getting the STAR ID than we usually do waiting in line to go through the normal process. So, it is our recommendation to go ahead and get this done now before everyone has to do it and the proverbial line gets longer. Plus, we’ve made it so easy- just follow the steps below:

Click Here to schedule an appointment to get your Star ID.

Click Here to see all documents needed to get your Star ID.

Previous Information shared:
When will I need to change how I travel domestically?

Starting January 22, 2018, passengers who have driver’s licenses issued by a state that is not yet compliant with REAL ID and that has not received an extension will need to show an alternative form of acceptable identification for domestic air travel. Please see TSA’s website for a list of acceptable forms of identification. Passengers who have licenses issued by a state that is compliant or that has an extension to become compliant with REAL ID requirements may continue to use their licenses as usual. For a list of states already in compliance or with an extension visit DHS’s REAL ID webpage. DHS continually updates this list as more states come into compliance or obtain extensions.

Starting May 3, 2023 every air traveler will need to present a REAL ID-compliant license or another acceptable form of identification for domestic air travel. A REAL ID compliant license is one that meets, and is issued by a state that complies with, the REAL ID Act’s security standards.

But what if my ID is not issued by Alabama or Tennessee? Anyone can check the compliance of their state here.

Passports are a mainstay of global business travel, but fewer hold a passport than you may think. For many people, a driver’s license is all the identification one needs to travel. After all, not everyone travels internationally. If your employees only ever travel domestically, they may not have a passport and have been using their drivers license to travel for business. Up until recently, that was not a problem. However, the rules of travel are changing and a standard driver’s license will soon not be enough. Here is what you need to know. The REAL ID Act In 2005, Congress passed a law called the REAL ID Act. It set forth a variety of security measures that would be adopted as a minimum standard for state-issued identification, like driver’s licenses. Whereas previously people could travel within the United States and its territories with only a driver’s license or state-issued identification card, the new rules would require travelers have an ID that meets REAL ID standards. The roll out of these security changes is incremental, but significant. Travelers will be able to use their existing driver’s licenses and state-issued identification cards for domestic travel at least until 2018. There is a chance that you will still be allowed to fly if you forget your identification, but only if you have another acceptable form of identification – and you should know that privilege only exists until 2020. “Starting January 22, 2018, travelers who do not have a license from a compliant state or a state that has been granted an extension will be asked to provide alternate acceptable identification. (Alabama & Tennessee are compliant). If you cannot provide an acceptable form of identification, you will not be permitted through the security checkpoint,” explains the Transportation Security Administration (TSA). “Starting October 1, 2020, every traveler will need to present a REAL ID-compliant license or another acceptable form of identification for domestic air travel.”

REAL IDs Look Different: One of the biggest changes is that the information featured on driver’s licenses and state-issued identification cards will become standardized. According to the REAL ID Act, each one will need to list the person’s full name, date of birth, gender and principal residence. They will also need to include a digital front-facing photograph, an identification number and the person’s signature, in addition to security features, in order to prevent tampering or duplication. Compliant identification cards will need to include technology that makes the cards scan-able. REAL IDs also look different from traditional state-issued driver’s license and identification cards. In addition to listing all the standardized information noted above, there will be a star in the top corner of the identification card. Alternatives to REAL IDs While REAL IDs will become a standard in the United States, there are alternatives your employees can use until they receive their REAL IDs. “A number of other documents can also be used as REAL ID. A valid U.S. passport book or passport card can be used as REAL ID, as can valid passports from foreign countries,” explains Passport Info. “Permanent Resident Cards, Trusted Traveler cards and valid U.S. military IDs also count as REAL ID.” Again, these alternative documents will allow your employees to travel domestically after the REAL ID requirement has gone into effect, but they are not a substitute. In addition, Passport Info writes that “Enhanced Driver’s Licenses, which demonstrate U.S. citizenship, can be used for REAL ID purposes.” Enhanced Driver’s Licenses Are NOT REAL IDs Enhanced driver’s licenses (EDLs) are state-issued identification cards that are issued after an extensive process that includes collecting certain biometric data. In addition to acting as a driver’s license, EDLs allow travelers to visit neighboring foreign countries, including Canada, Mexico and parts of the Caribbean, as long as they are traveling through a sea or land port of entry. They include two unique security measures: a vicinity Radio Frequency Identification (RFID) chip and a Machine Readable Zone (MRZ) or barcode that can be scanned as a backup to the RFID technology. EDLs are not REAL IDs. They cost more than REAL IDs and are only available to people who are both licensed drivers and U.S. citizens. Don’t Worry: There is plenty of time to get prepared and to be sure that your business travel isn’t affected by the new REAL ID standards.

Want to get a STAR ID in Alabama: Click Here

Want to get a REAL ID in Tennessee: Click Here

Notes: You have to go to an actual DMV office and not a satellite office. You should go ahead and get the STAR ID when your license expires to save a trip back before you are due for renewal. If you have a passport, that will still work in place of a REAL ID, STAR ID, etc.