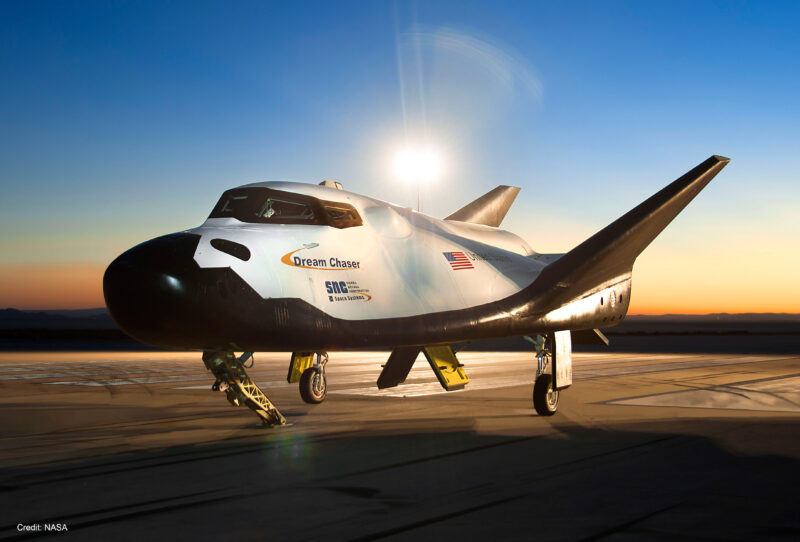 “Huntsville has propelled us into another historic first for our state with the award of the commercial space vehicle reentry license for Huntsville International Airport,” said Gov. Kay Ivey. “We appreciate the collaboration exhibited by our public and private partners to make this a reality.”

The concept of a space vehicle landing began in 2014 with a consortium of public and private partners including Huntsville International Airport, Teledyne Brown Engineering, Sierra Space, RS&H, the Huntsville/Madison County Chamber of Commerce, the City of Huntsville, Madison County, the City of Madison, The University of Alabama in Huntsville, the Military Stability Foundation and the State of Alabama.

“The landing of Dream Chaser at Huntsville International Airport is part of a vision for economic development that continues our legacy in space science and taps into our workforce expertise and assets developed for the International Space Station,” said Tommy Battle, Mayor of Huntsville.

Landing the Dream Chaser in Huntsville was identified as one of three pillars of the commercial space strategy developed in 2016 for the Huntsville/Madison County Chamber. The Chamber has been working to build a commercial market for low Earth orbit using the Dream Chaser as the cornerstone. Efforts include sponsoring two competitions with the European Space Agency, hosting three workshops for industry and academic partners, hosting a panel discussion on research and development in microgravity at South by Southwest (SXSW), exhibiting at the National Space Symposium and Space Tech Expo Europe, and several media stories including a national profile on Fox and Friends.

The reentry license application was submitted by Huntsville International Airport in November 2021, and approval was contingent upon the finding of no significant impact through the FAA’s Environmental Assessment. The public was invited to participate in the assessment, which examined air space, noise, historical preservation, wildlife and impact to waterways within the anticipated reentry trajectory of the vehicle.

Initially, the obtaining of the FAA license is specific to Dream Chaser; however, this proof of concept supports other space reentry vehicles, and each would require additional FAA licensing.

Sierra Space has been awarded six missions by NASA to resupply the International Space Station via uncrewed vehicles. The effort includes obtaining the FAA License to Operate a Reentry Site and a Reentry Vehicle License. With the approval of the Reentry Site License, the team continues pursuing the Reentry Vehicle License anticipated to be submitted in June of 2022.  Potentially, the FAA could grant the Dream Chaser the option to land at HSV starting in 2023.

“This is a significant milestone for Huntsville International and for our community in the pursuit of landing a commercial space vehicle right here in Rocket City U.S.A.,” said Mark McDaniel, Chairman of the Board of Directors for the Port of Huntsville/Huntsville International Airport. “That’s going to be an exciting day, not just for the Airport but also for the talented and dedicated partners in this effort.”

Huntsville International Airport (HSV) is known throughout its 18-county service region for providing customers with state-of-the-art facilities, amenities and services. Some notable features of HSV include its two parallel runways, the east runway at 10,000 feet and the west runway at 12,600 feet, with a 5,000-foot separation allowing for simultaneous operations during instrument conditions. With over 1 million annual passengers and six passenger airlines available to provide non-stop commercial service to 14 destinations, HSV is able to offer a variety of competitive flights and fares. For more information, visit flyhuntsville.com.